An armed attack took place in north of Sanaa; targeting a group of Huthies (Shiite group), today, while they were commemorating the holy Ashoura day. Four people were killed and a few were injured.

Very disturbing developments on the sectarian level in Yemen. Today is believed to be the first time that the capital of Yemen, Sana'a witnesses such an attack. Typically, the armed fight with al-Huthies would revolve in north parts of Yemen. For instant, exactly like today last year, there was a signed agreement between al-Huthies and a Salafist group to cease the tension and the siege on Dammaj province that witnessed armed fight and a worsening humanitarian situation. 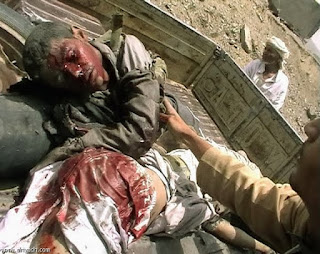 The press office of al-Huthies group issued a condemnation statement calling today's attack as an extension to atrocities made against citizens in several Yemeni cities and different religious occasions like the one in al-Ghadeer day attack, in Nov. 3, 2012.

Other political parties have condemned the attack additionally. And the question remains, who is systematically targeting al-Huthies and triggering fatal sectarianism in Yemen? and why? "There are groups who have an interest in pushing sectarianism in Yemen - lets not fall in that trap!" tweeted @womanfromyemen, Atiaf al-Wazeer, researcher and an activist.

The state TV aired the following footages from the scene: