"We appeal to Yemen's president, Hadi to issue an official decree to move out all weaponry bases from the capital city of Sana'a and replace them with hospitals or/and parks for the public," says Sana'a province's governor, Abdelqader Helalh while holding in his hand one of the weapons' pieces that flew from today's explosion at General Ali Mohsen al-Ahmar's weaponry base caused by electricity shock.

During a students event Helah was attending located next to the weaponry base, a rocket from the explosion flew till neighboring buildings. Hence, he was able to hear the explosion and get hold of of one of the pieces showing in his hand in the clip. One of the soliders inside the camp got killed, two civilans at neighboring places were killed and around 12 people were injured.

This incident makes me think of the a very important violation of Human Rights in Yemen which is the Right to Safety. How on earth it's allowed to have weaponry bases to be located in the middle of cities. Here is an illustration that displays how Sana'a is fully surrounded with tens of weaponry bases:- 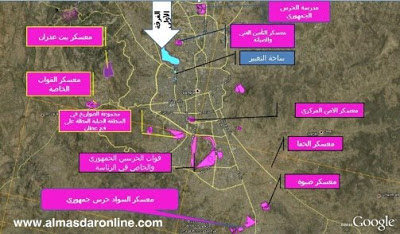 One would ask how did that happen? well, ex-president Saleh's system made sure to enforce weaponry bases inside the capital somehow for his personal interests. However, calls to remove military bases have always been in Yemen since the 1994 war and the Socialist political party was one of the outspoken parties against that. But, of course, in a country that has weapons more than its population, having a weaponry base in the city is so NORMAL. - I'm being frustratedly sarcastic about that.

Take a look of young men humorously holding ruminant of the exploded weapons: 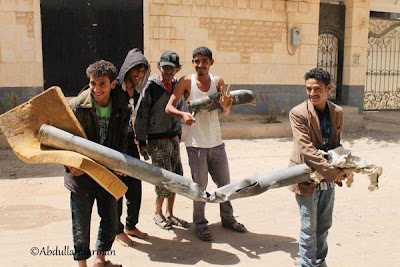 And here are videos of the raising smoke from the scene: