People of Aden are Bleeding for Secession

Here is one of the problems Yemen has to deal with.

People in Aden has been calling for secession since 2007 with a series of protests taking place around the whole city and neighboring cities around the south part of Yemen. People are protesting on a regular basis since then calling for secession. Nearly every day or so, there is a young man in Aden who has been killed after security forces shoot at protesters. Plus, security forces would systematically arrest young men from their homes with no clear accusaion and their families wouldn't know where are they.

Today, as I'm writing this post, two children (not confirmed if they were children or adults) were killed and eight where injuired by security forces shooting at them with live bulets while they where marching in a protest; holding the the southern flag of independence. Reportedly, they were marching in a funeral walk of Ahmed Jamal who has also been killed by securty forces, sometime last week. Here is a clip of when protesters were shot at.

And here are couple pictures of the injured men. 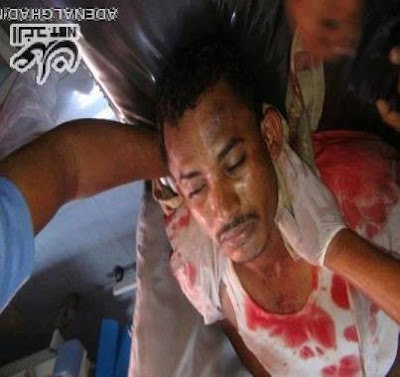 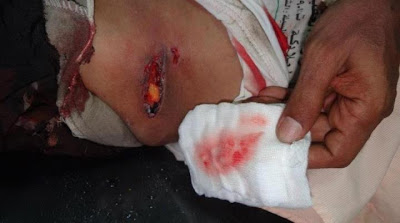 I really think it's very sad to see the continuous bloodshed in Aden. Today's incident is happening on a regural basis. Young men are shot dead on a regular basis. They have been calling for secession for over five years and no one is listening. I truly believe they have legitmate demands and I'd fully support to establish self-determination process for the south to decide. It's not that I hate Yemen's unification, but I hate injustice more than anything else.

Yemeni writer living in UK, Dr. Abdullah Abelsamad writes on Facebook,"it's a genocide for southern people. Unfortunately, in Aden, there is a martyr after another, an injured person after another, displaced people, homeless people, shelling houses, no electricity, no water, and a tight siege on the whole city. It's a genocide."

And this is a picture sent to me from one of my tweeps, showing several men in Aden carrying out a civil disobedience protest: 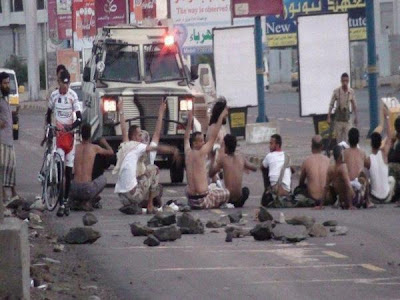 For more the latest news about Aden, you can visit Aden al-Ghad.