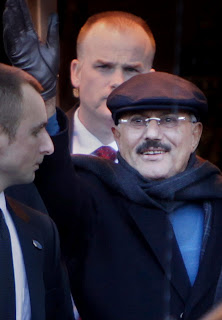 (Source AP) Ali Abdullah Saleh waves to people protesting his presence in the United States as he exits his hotel in New York, Sunday, Feb. 5, 2012. Saleh arrived in the United States on Saturday, Jan. 28, 2012, for treatment of burns he suffered during an assassination attempt in June. Human Rights Watch, a New York-based human rights organization says it has documented the deaths of hundreds of anti-government protesters in confrontations with Saleh's security forces, and while they are not opposed to Saleh receiving care in the United States, the organization wants assurances that concerned governments will insist on prosecution for those responsible for last year's attacks. (AP Photo/Seth Wenig)

So, a protest was held by the Yemeni community in NYC. Photo taken by, my spiritual sister, Summer Nasser in NYC 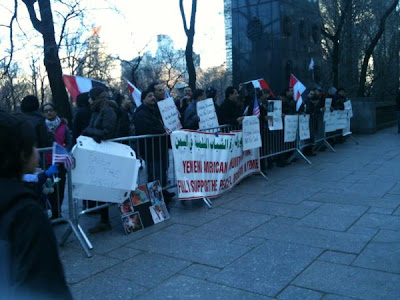 She also tweeted, "one protester tried to run across the street to go after him. He got arrested!!!!!The protester took his shoe off and tried to throw it at Saleh but didn't reach him." Here is a picture taken by Summer for the shoe. 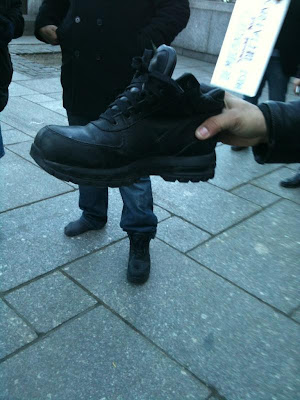