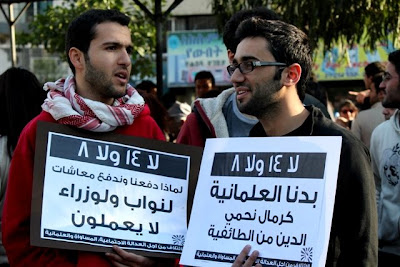 (DailyStar)BEIRUT: Around 400 people marched from Dora, Greater Beirut, to the Electricite Du Liban building in Mar Mikhail Sunday calling for social justice and with the hope of relaunching the anti-sectarian movement that rose to prominence last year.

Protesters chanted anti-sectarian slogans as they marched through residential areas with the hope of generating interest from passersby.

“We want to get the idea back into people’s heads that the system is not working,” said Nadine Moawad, a member of the feminist collective Nasawiya, which helped organize the demonstration. “It’s the beginning of a series of actions and demonstrations to bring back the movements. It’s not a one-off thing.”

Anti-sectarian movements are a small but long-standing feature of the Lebanese political scene but became particularly prominent in the early half of last year, with activists holding weekly protests, at one point attracting 20,000 people in a march from Beirut’s Ashrafieh district to the Interior Ministry in Sanayeh, before the movement appeared to lose momentum.

Moawad said Sunday’s protest had been “small but effective.”

“The size reflects the independence of the march,” she said. “Every single political party told their followers to boycott the event.”

Among the demands of the protesters are better transportation, education, rent control, wages and women’s rights, with Sunday’s protest focused particularly on the country’s crippled electricity sector.

“We’re bringing all the campaigns together,” Moawad explained. 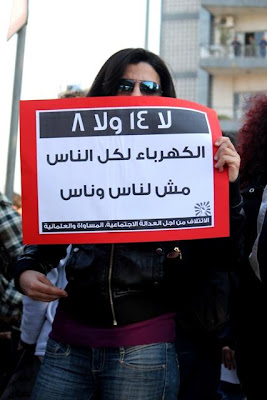 “Sectarianism is responsible for everything. There’s nothing right in this country, no work, no benzene [fuel], nothing,” said 19-year-old chemistry student Carina Ayoubia during Sunday’s protest.

The protest was advertised in the prior days as a funeral for EDL, the state electricity company which provides just 21 hours of electricity a day in Beirut, and fewer outside, and at the end of the march organizers hung a funeral wreath on the gates of the building.

Speakers decried the “lies and hypocrisy” of Lebanese politicians which they said were keeping the country in “hours of darkness.”

Watching nearby, 29-year-old travel agent Joelle said she had never been involved in any form of civil demonstration, but that “if the crisis persists like this, of course I would go and protest with them.”

However she also added that, “the main problem is the electricity,” and not sectarianism.

Civil society demonstrations have been on the rise over the past number of years in Beirut, with the first recent milestone in April 2010 when 5,000 people marched from Ain al-Mreisseh to Parliament to demand an end to the sectarian system.

Seventy-year-old Rashid Zaatari said the country could not move forward without addressing the sectarian system. “We are not individual citizens in this system; each one of us is affiliated to his own sect from the date of his birth to the day he dies,” he said. “We cannot build a nation state with sectarianism structured in our political system.”

Some activists cited the Arab Spring as inspiration for last year’s protests, following the toppling of leaders in Tunisia and Egypt in the early months of the year.

But last spring’s slogan, echoing the Arab uprisings, “the people want the end of the [sectarian] regime,” was only briefly heard at Sunday’s protest, before being drowned out by other chants.

Speaking to The Daily Star at the protest, 29-year-old engineer Mohammad said the anti-sectarian movement had important differences to the uprisings in the rest of the region.

“It’s not similar really to the Arab revolutions,” he said. “It’s going to take people a long time to make change [here].”

Active in last year’s anti-sectarian movement, he said the time was ripe for a rebirth.

“The movement’s a bit more mature now,” he said. “We understand more that it’s going to be a long-term, not a short-term thing.” – With additional reporting by Brooke Anderson