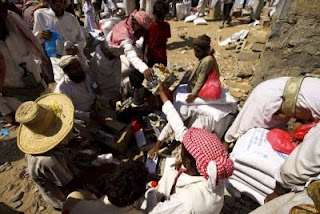 Horror and fear is sweeping the city of Taiz due to the continuity of the clashes between government troops and demonstrators and clashes mostly happened after midnight. As a result of this many families have left their homes in the city and ran to the countryside. Many buildings were destroyed as because of the random artillery.

The traffic has stopped in Taiz due to the lack of fuel and diesel and the price of a 20 liters has reached 5000-7000. The city is also threatened by the spread of many plagues and diseases because of the piles of garbage that is spread all over the city.

The presence of armed tribesmen in Taiz also increased violence between the government troops and the demonstrators backed by tribesmen. The hospital in the Freedom Square in Taiz has called upon all humanitarian organization to help the hospital that is suffering from lack of surgical medicines, antibiotics of all sorts, blankets, beds and other medicines to help those who are infected with poison gas.

The sanitation system is also suffering and is causing also an environmental crisis that can also cause many diseases and the local authority has done nothing about it. Electricity blackouts has added an extra burden on the life of citizens and since the city is in the months that is so hot people are suffering from the high temperatures and many children were hospitalized due to problems in breathing.

Mohammed Saleh, a citizen from Taiz told us that in addition to this, many government building were also destroyed and now there are groups of people not know who they are practice looting both government buildings and also house exploiting the situation of the chaos to d their crimes.

The number of deaths and injuries in Taiz is not know until now for sure due to that some bodies are being taken and disappear. There is not definite record for the number of deaths. Seyaj organization for protecting childhood said that they have records for Yemen at large and that they record more than 59 children were killed all over Yemen in the past four months in demonstrations, and more than 50 were severely injured. For the past two moths only more than 50,000 families were forced to leave their houses in Sana'a, Taiz and Abyan.