The World Thirsty to Hear from Arab Youth 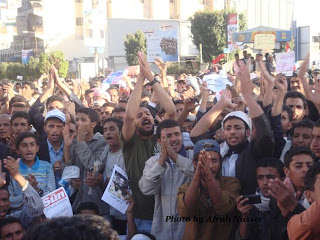 While I'm in Sweden; participating at the international program "The Young Leaders Visitors Program 2011" I can feel that my heart and mind are still in Yemen. I keep being glued to my iPhone, laptop, twitter, facebook and youtube; searching all the time about the news in Yemen. Sometimes I read/watch sad news but I resist to be frustrated because I strongly believe it's just a matter of time and Yemen will be free of Saleh. It's just a matter of time!

Before coming to Sweden, I was one of the speakers in the international conference about Cyber Activism, in Denmark where a number of female activists/bloggers/journalists from different Arab countries gathered to share their experiences with cyber activism pre-during-post revolutions around the Middle East. At the end of the conference, the speakers were asked lots of questions by the audience and were having interviews with media during most of the time.

That made me realize how the world is thirsty to know/hear/understand what exactly happened in those countries and inside those Arab people. The world wanted to comprehend what/why/how..etc those revolutions occurred!

Today, I'm learning very high tech skills related to social media which I assumed I had a good knowledge about! - apparently not :S .. - Thanks to the YLVP 2011, I'll have the chance to interact more with the world and speak out about Yemen's issues and Yemen's revolution.

I truly believe that the world is eager to hear from Arab youth who were fed up with a life without freedom and dignity and wanted to let its willpower determine its future, not let a dictator leader determine their future!

Therefore, I'm also going to speak at the global conference "Courageous Leadership - The importance of youth as democracy builders", here in Sweden in couple days. Of course, I'll blog about it once I finish the conference... - To Be Continued ^__^