Journalists Under Attack in Yemen

This video is about the journalist Abdel Kawi Amin Sharaf brutal attack of security forces during media coverage of events in Taiz, Yemen 05/12/2011.


Physical attacking and sending threatening messages to journalists and activists in Yemen is one of Saleh’s tactics to silence any news coming about the revolution and his escalating aggressive oppression towards Yemenis.


Today, Yemen Times newspaper’s Facebook page stated “An unknown number called the Yemen Times correspondent in Taiz, threatening to kill him if he reported on any of the events that took place Sunday night in Taiz.”

So far, it’s reported that around 50 people were killed after a group of security force soldiers have raided the protest camp in the heart of Taiz city, known as the “Freedom Square”, at 3:00 AM on Sunday, 30 May, killing dozens of people and injuring others.

Yemen Times newspaper’s journalist could also be one of the killed just because he reported about this! In the meantime, a number of journalists had their share of aggressive oppression from security forces or Salah’s thugs. It was whether physical attack or a threat message, or BOTH!

-On 25th of May, journalist Mohammed al-Dailami, working for United Press International – American news agency, was beaten by an unknown armed group- thought to be some of Saleh’s thugs, in Sana’a. They hit his car while he was driving on the morning, forced him to step out the car, and started to beat him publicly. They seized his laptop and mobile and run away.

-On 15th of May, journalist Ryatha al-Adibi’s camera was seized and was beaten by security forces while he was covering one of the demonstrations in Taiz.

-On 15th of May, journalist Anis Hamida, was beaten by an unknown armed group while he was walking normally at a street, at the southern part of Yemen (A’na). 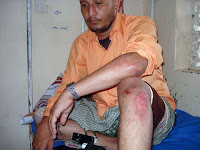 -On 27th of April, female activist from Taiz, Boushra al-Maqtari’s house was attacked by live bullets gunfire by an armed group. She previously received many death threatening messages.

And there are many other cases that also faced horrific attacks.

For me, I already had my share back on March when I received a threatening message. Today, I also received another one by unknown person stating:-
“My warm greetings to you. I know that you are outside the country. I wish you be back very soon so I could teach you an unforgettable lesson as a response for all the disrespectful words you said against the dear Mr. President Ali Abdullah Saleh, may Allah bless him!