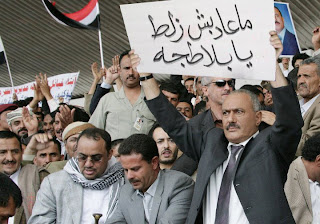 COUNCIL OF THE EUROPEAN UNION

The Council adopted the following conclusions:


"The European Union is following events in Yemen with extreme concern. The EU condemns
President Saleh’s repeated failure to sign up to the GCC sponsored initiative. This is despite
agreement by all the political parties including the ruling party and the relentless efforts of the Gulf Cooperation Council and its Secretary General. Those efforts have the full backing of the EU.

The EU appreciates the constructive response from the opposition to the GCC initiative and remains committed to an inclusive process, in the interests of the Yemeni people. The EU calls on President Saleh to follow through on his commitment to transfer power now.

The EU deplores the failure by President Saleh and the Yemeni security forces to ensure safe
passage of diplomats from the Embassy of the United Arab Emirates in Sana’a on 22 May,
including the GCC Secretary General and GCC, EU, United Kingdom and United States Ambassadors. This contradicts Yemen’s responsibilities under the Vienna Convention on diplomatic relations.

All use of violence against peaceful protesters must stop immediately. The EU supports the
proposed visit of the Office of the High Commissioner for Human Rights which should serve as a
first step towards assessing the human rights situation and helping Yemen to ensure accountability.

Further deterioration in Yemen's economic and humanitarian situation is seriously affecting the
Yemeni people and underlines the need for a political settlement. The Council and the EU Member States will review their policies towards Yemen and prepare their response to developments accordingly."