The Week of the Last Chance

“Friday of the last chance,” that was the title of yesterday at the change square when tens of thousands of protesters attended and expanded till they reached the largest street in Sana’a; al-Steen St. They were telling Saleh that his time is about to be up. As I was leaving the square today, I heard the announcement coming from the stage that this week was called “the week of the last chance.” There is a collective sense of that it’s about to be over somehow!

The latest news says that Saleh accepted GCC plan, handing power to VP in 30 days. Still, the JMP has conditioned the initiative. Nevertheless, the square is still full with protesters and tents. Thousands are still protesting tirelessly and want the ouster of Saleh and his family, no matter what.


Till the officials reach a deal that suits everyone, life at the change square is nothing but interesting! 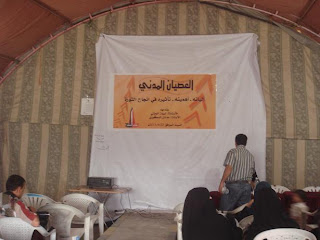 While I was entering the square, I noticed that there was a big tent with a large banner that says “Civil disobedience”. Apparently, they were about to start a seminar on the subject-matter which indicates that Sana’a will follow the other provinces and start civil disobedience as well and paralyze life in Sana’a; as a method to put greater pressure on the government.

I walked ahead and lifted my head up and saw a beautiful long banner that says “Integrating women and youth in administrating the state and its institutions.” I couldn’t help it but become glad to see that the “women” word was placed before everything else. That was made as a response to Saleh’s offensive words against female protesters’ presence at the square, I thought. 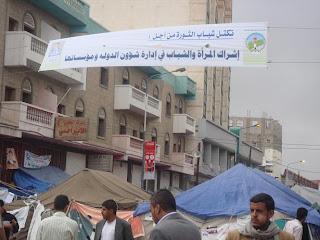 Then, I moved on walking and suddenly heard the national song was being played. Automatically, tribal men stood up right away and paused respectfully for the national song. I was blown away to see that! The fact that they already are protesting peacefully; leaving their weapons at homes and coming for peaceful protests amazes me and now seeing that made me fly out of joy. They are demonstrating how they are way more civilized than how the world thinks of them. 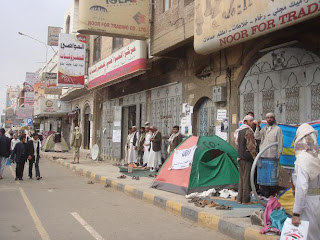 Walking through the tents while it was a little bit rainy, felt wonderful. I turned left to see inside one of the tents and I saw men glued to a tiny TV; watching a political program and the presenter was a woman! “Oh! How lovely!,” I secretly/smilingly said. 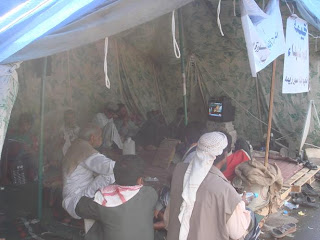 These days, football matches between the classico; Real Madrid vs. Barcelona are taking place and Yemenis are crazy about football, in general, and crazy about those two teams, in particular. Hence, I found out on big banner that there is a special place for watching the games at the change square! 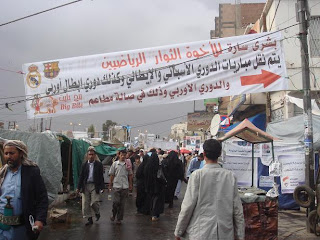 Next, I reached the central spot at the square. The ground was full of water because of the rain. One woman from the protesters was comfortably sweeping the ground to move the rain water away and make the ground drier for the others. A great sense of collaboration can be felt easily at the square. 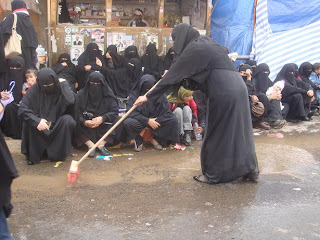 I stood up there and had a quick chit chat with an old lady; one of the protesters. “I have two sons and they are still college students. They protest everyday and made shifts to sleep over at the square. They always participate at the rallies. I’m scared for them that one day they might be victims of the aggressive oppression by the security forces and yet I can do nothing to stop them from going to the protest. They are so driven that nothing can stop them. They have already faced oppression acts from the security forces and yet that made them more determined to continue protesting,” she told me. “What does their father think?,” I asked. “Let them protest! The future is theirs. I don’t want them to suffer and live a miserable life like how you and I did and had. Let them protest!,” she answered. 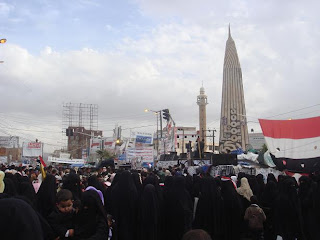 Then, we were interrupted when al-Arabiya TV channel crew came to shoot with me about blogging, at the change square. “Gosh! I told you all that smoothly while you are waiting for TV crew to come and meet you. You are not an easy girl!,” the woman loudly told me while I was walking away with the crew. 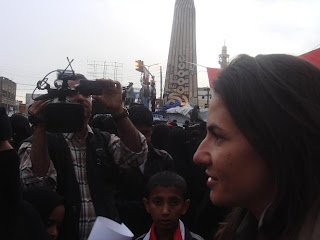