No for creeping. Yes for peaceful protests 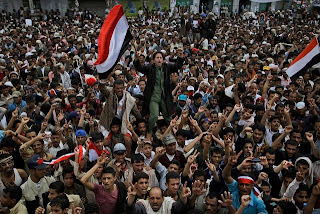 Confusion and anticipation are what dominate the ground in Yemen, right now.

For the past two days, there have been conflicting news about "The protesters will creep to the president's residency, on Friday." However, there have been news from the media committees coming from the tents at the change square that there is NO such of thing that could happen.


The real essence of Yemen's uprising is that it's totally peaceful. Something like creeping would only mean a direct confrontation with security forces -right next to the president's residency- which would only lead to violence.

Facebook pages in Yemen , related to the uprising is full with posts stating "No for creeping. Yes for peaceful protests." Everyone is talking about tomorrow and what it holds!

People are afraid that what happened last Friday, when around 50 protesters were shot dead by snipers next to the change square, would happen tomorrow. Hence, people are already doing everything to remain at homes and not go out, tomorrow.

Of course, that's not the case at the change square. Protesters named tomorrow " Friday of Departure" for Saleh and they are very determined that he will leave this Friday.

In the meantime, today a massive Yemenis fasted -Since fasting Thursdays is very beneficial in Islam religion- to pray that Allah may save Yemen from any harm coming.

Honestly, I think people are really scared of each other. Yemenis are armed people and having weapons is not a strange matter for any house. However, I can feel the fear everyone is feeling if anyone might use his weapon and I also can see that no one is willing to use his weapon.

My greatest wonder is, if no one is wanting to use his weapon, who will start a war or violence!! Truly, I do NOT see any war coming. Yemenis have the kindest heart, regardless of what's been said.