The Situation in Yemen as Egypt's Uprising 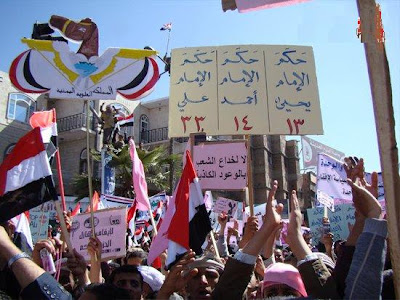 While the uprising in Egypt is still going on and Yemen is still witnessing pro-change protests, inspired by Tunis and Egypt, in Sana’a and a number of governorates in the south, news of Yemen’s bleak condition is overlooked.

The recent challenging issues in Yemen are;-

-Security issue is not given an enough attention. Director of the US National Intelligence, James Clapper stated that the deteriorating situation in Yemen will strengthen the terrorist groups. “The security, political and developmental challenges Yemen faces is the biggest threat Yemen encounters since its civil war in 1994,” he said.

-An eye will be on the coming meeting of “Yemen’s friends” that will take place at the end of March, in Riyadh, KSA. The meeting aims to discuss the implementations of the promises made previously in UK by donors who are supporting Yemen. Will the meeting fail?

-There are extreme warns of Yemen’s currency deterioration. It’s reported that there are serious worries that Yemeni economy will collapse within two years if the economical and functional inflation continued.

-In the mean time, southern parts of Yemen are witnessing kidnapping and jailing of individuals from both sides “the army and the protestors”. In addition, it’s reported that security authorities are well-prepared and spread in Aden to control any chaos happening as a result of protesting, today.