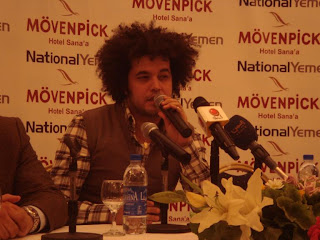 Recently awarded as the best upcoming singer, Abdel-Fattah Jerini celebrated with Yemeni audience the New Year’s Eve. It was a celebration for the occasion by and at the Mövenpick Hotel in Sana’a, last Friday.

“I’m here for the first time but definitely won’t be my last visit,” smiling said Jerini at a preceding press conference held by Mövenpick Hotel and National Yemen newspaper. He spoke of how it didn’t take too much time for him to accept the offer and how he would like to do more concert in Yemen in the future.

“I’ve always been fond of Yemen and Yemenis. I have some Yemeni friends and I’ve worked with a number of Yemenis musicians, hence I’m very familiar of how this nation is. I know for sure that this country is where grand civilizations started and that Yemenis have a great deal of generosity, kindness and hospitality,” said Jerini, describing Yemen and Yemenis.

Osama Abaza, general manager of Mövenpick Hotel talked about the reasons of choosing Adel-Fattah to perform in this occasion, “Jerini was chosen for many reasons. He is very talented, young, has a huge audience, mixes modernity and classical melodious tones and performs nothing but exceptional songs.” Abaza stated that Yemenis audience wouldn’t accept anything less than great singers… “Jerini is an exceptional singer and Yemenis will only like outstanding singers like Abdel-Fattah.”

Security has always been an issue whenever Yemen plans to conduct a big event. In addition, many figures might refuse to stay in Yemen for security reasons since several terrorist acts accrued in Yemen recently. For Jerini, it was not an issue at all. He said he right away accepted the offer without any hesitation. “I was so excited to be here and I never had pause to think about it. Nevertheless what’s presented in the news about Yemen, I didn’t pay any attention to that. All I knew, I love Yemen and I’d love to have a concert there,” explained Jerini. 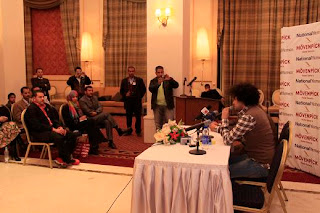 According to Jerini’s general manager, Nasr Nasser there was no doubt that the concert was going to happen in Yemen. “It was the quickest contract we have ever done; we didn’t even take further time after the offer was brought. It was very important that the concert take place in Yemen. In fact, we received many offers with unbelievable big numbers but Yemen was the most important. It’s an honor to do the concert among such a nation which has a prestigious civilization,” said Nasser.

Abdel-Fattah Jerini expressed his desire to collaborate with Yemeni musicians in the future and use Yemeni melodies and rhythms in one of his coming songs. “If I have the chance to have some Yemeni songs, I’d love to do so,” said Jerini. He also expressed his want to shoot sometime in Yemen for his clips.