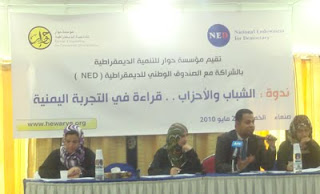 Young people are completely excluded from the political scene in Yemen, unless they come from political families, and nothing could enhance their political participation except the solving of the many urgent problems they already face. That was the main theme of al-Hewar Foundation for Democratic Development’s (HFDD) seminar, titled “Youth and political parties…from a Yemeni perspective,” that was held last week. The seminar was conducted in cooperation with the National Endowment for Democracy (NED) in a continuous attempt to enhance the democratic nature of Yemen’s civil society and Yemeni youth’s political involvement.

Activist, Majed al-Mathaji said that youth have gone through different stages in Yemen’s political history and many historic and political events have had a large impact on their current political situation. He added, “Yemen’s active political participation consists of only old people. There is no space for youth.” 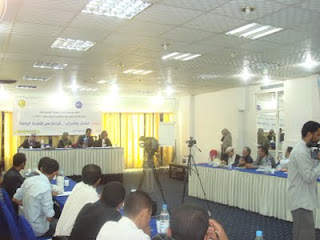 “Sadly, political use of youth only occurs during election times, simply attracting them to fulfill the parties’ main hidden goals,” she added.

The seminar also pointed out that political parties must focus on the Internet, where youth find most of their information. “It’s very notable to find political parties’ websites very insufficient and deserted when the youth today depend on the Internet for almost everything. Therefore, political parties are not fully talking advantage of current technology that is crucial to educating youth about how and where to participate politically,” said Suha.

“All I want to say is that youth are the nation’s treasure and, in particular, they are the political parties’ treasure too. If we don’t use them for the better, political parties will disappear and youth will become tools for terrorist attacks, just like what happened in the recent suicide bombing on the British embassy, where a young man was easy prey for terrorism and blew himself up, ” she added.

Rana Ahmed Ghanem, Head of the women’s center at the social and democratic forum, pointed out that it’s important not to detach youth’s political reality from their overall reality. “When we talk about youth’s political participation, we can’t exclude it from other issues related to youth and the society as a whole. It’s also important to consider that we are talking about youth in the third world, suffering from a large number of issues. Plus, those youth belong to a country that is, according to most statistics, ranked one of the worst countries in terms of development. They belong to a country that has seen war and is currently experiencing a deteriorating situation that reflects youth’s general political participation. The government talks about empowering youth politically, but that only happens for the elite, something that’s very frustrating for the other youth.”

She remarked that youth’s political movements have become weakened just like women’s civic involvement, saying, “Youth are excluded from the political scene just like women are excluded from civic engagement. Nevertheless, one of the most harmful results of excluding youth is that they tend to participate politically in a negative way. That’s to say, they begin to see positive aspects in terrorism. This happens unconsciously after a long period of frustration and devastation. Youth also become prey to many things like drug addiction, crime, and immigration. On top of all that, the tribe mentality dominates youth’s mentality because that’s what they relate to power and affiliation to the country.”

“After all, family upbringing has to be democratic so that the coming generations, who are tomorrow’s citizens, are more politically aware and think about politics as a necessity, not an extravagance, “ concluded Rana.