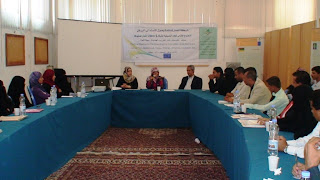 With the presence of Dr. Raufa Hassan, chairperson of CDPF and nearly all members of Anssar’s network, the meeting reflected on the network’s progress and their future plans.

The meeting aimed to present the final presentation on the concept behind the network’s cause, its progress and its future plans. Throughout the meeting, CDPF and Anssar network exhibited their progress for conducting programs empowering women’s political participation in the eight targeted governorates. In addition, the meeting included representing CDPF’s report of raising awareness, discussions on the network’s role in communicating between political parties and decision makers.

Dr. Raufa Hassan, chairperson of CDPF, Yahya al-Sharqi, Anssar network project’s manager and Intsar al-Shawafi as well as the the training unit’s manager overviewed the meeting, giving speeches on the importance of Anssar network’s main goal which is to support and empower women’s political participation in parliament.

Anssar network’s goals, activities and plans consist of training staffs from civil societies on empowering women political reach and expanding and collaborating with other network’s

A specialized team from CDPF is handling the network’s work and conducting small meetings with other networks and organizations working in the field of empowering women’s political participation in order not to have conflicted activities for the same purpose. CDPF is also carrying out training programs for the network’s members.

CDPF and Anssar network are jointly working to improve women’ political participation by encouraging women to assist in decision making.

Anssar network aims to work in 10 governorates rather than 8 governorates and in the future expects youth to play a large role in cooperating with other networks working for the same cause.