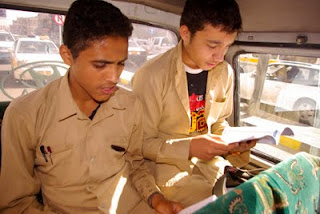 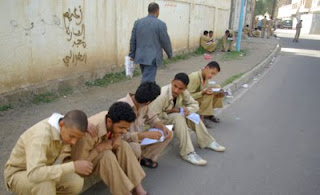 When more than 5 million primary and high school’s students throughout the country began their final exams last week, they were not only concerned of how to pass those exams but also they were overwhelmed with many other serious issues. One of the most predominate issues they face is the frequent and long electricity blackouts that greatly affects their performances during their preparations for the exams.

Regardless of that this is not the first time students face difficulty studying because of blackouts for no specific reasons, this time it was reported last month that saboteurs did subversive fired shots at the connecting cables at the Marib – Sana’a transmitting line, connecting the Marib gas turbine which damaged two transmitting lines in Marib Governorate causing the complete stoppage of the station. Couple days later, it was confirmed that the Abeeda tribes in Marib province were blamed for that firing shots power transmission lines linked to Sana’a for political reasons, leading to the break down of the Gas Power Station.

Consequently, Sana’a and perhaps some other provinces were affected by that. Most affected were students who happened to have their final exams during Yemen’s hottest weather which is summer time. Fatima al-Thawr, two sons’ mother expressed her frustration over how blackouts negatively affect her sons’ studies. “It’s strange how every time my sons start to study for the next day exam, the electricity goes off. Then they have to study with candles and I’m really afraid for their eye-sight’s health,” she said.

“It’s very challenging to study while you are in a blackout. Studying with candles is very bad to my eyes’ sight. Therefore, I only study at down or at the afternoon, since I’m expecting electricity blackouts every hour and then,” complained Mohammed al-Bahri, one of al-Kuwait School’s students.

Abdullah Ali al-Wahbi, Saif Bin Thi Yazan School’s principle described the situation to be nerve-raking for his school’s students and their parents. “We are witnessing an unusual nervousness among the students, and high tension from the parents, especially it is the days of exams, and electricity is shutting off. The government is excused, yet we hope it can fix the electricity problem as soon as possible,” he said.

Al-Wahbi wondered about the old power stations and how they are not made to be back-up stations in cases a situation like the current one happens. He directed a question to the Minister of Electricity, “where is the old station that it used to be the power provider to Sana’a before Marib station?”

He added that it’s unlikely to holdup exams while the stations are being fixed, “I don’t think it is possible to delay the exams for the blackouts reason. The transferring exams should be held in its exact time, because we are having the graduation exams in June 20th, and we can not miss this time schedule.”

Schools could have adjusted their procedures but al- Wahbi didn’t think so, “We can not do anything else to students, but to make sure that they have a quite and suitable environment when they are working at their exams is what we can do. We even can’t extend exams’ durations, since we have two patches examining everyday. Nonetheless, we are expecting good results, since we have a regular contact with the parents, and constant follow-up for the students’ performance during the year.”

Abdul Khaliq al-Faqeeh, one of al-Kuwait School’s students said that, “as a student my main concern is the electricity not my exams. We all students have to study with the continuous electricity blackouts and that is not the proper way to study thoroughly.”

Another student from al-Kuwait School, Adel al-Harithy complained “I can not focus on my study while there is all these crisises in Yemen. Many serious issues also worry me. For example, the gas crisis, let alone the electricity blackouts. All that and many matters worry me.”

Ahmed Nasser al-Hada, Ibn Majid School’s principle pointed that things are not totally bad. “The students are not causing any sort of troubles in the transferring exams, but I find teachers’ absence is causing some troubles. The students are really being affected badly by the continuous electricity shut-down, and we are very concerned of the graduating exams students. We do not have any problems so far and we are well-prepared to start the graduation exams in the scheduled time,” he concluded.