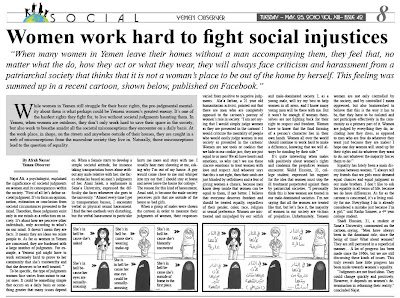 “When many women in Yemen leave their homes without a man accompanying them, they feel that, no matter what the do, how they act or what they wear, they will always face criticism and harassment from a patriarchal society that thinks that it is not a woman’s place to be out of the home by herself. This feeling was summed up in a recent cartoon, shown below, published on Facebook.”

While women in Yemen still struggle for their basic rights, the pre-judgmental mentality about them is what perhaps could be Yemeni women’s greatest enemy. It’s one of the hardest rights they fight for, to live without societal judgments haunting them. In Yemen, when women are outdoors, they don’t only work hard to save their space in the society, but also work to breathe amidst all the societal misconceptions they encounter on a daily basis. At the work place, in shops, on the streets and anywhere outside of their houses, they are caught in a web of misconceptions from the masculine society they live in. Naturally, those misconceptions lead to the question of equality.

Najat Ali, a psychologist, explained the significance of societal judgments on women and its consequences within the society. “First of all let’s define societal judgment. It’s to form an opinion, notion, estimation or conclusion from societal circumstances presented to the mind. Therefore, those judgments exist only in our minds as a reflection on society. It’s about how we perceive other individuals, only according to what’s on our mind. It doesn’t mean they are facts. It means they are ideas we relate people to. As far as women in Yemen are concerned, they are burdened with a large number of judgments. For example, a Yemeni girl might have to work extremely hard to prove to her community that she’s trustworthy and that she deserves to be well treated. ”

To be specific, the type of judgments women face varies from minor to major ones. It could be something simple that occurs on a daily basis or something greater that many issues depend on. When a female starts to develop a simple societal attitude, for instance taking transportation buses alone without any male relative with her, she faces obstacles based on men’s judgments of her. Amal Saleh, a sophomore in Sana’a University, expressed the difficulty she faces whenever she goes to the university. “Almost every time I get in transportation busses, I encounter verbal or physical sexual harassment. I find the two methods very disturbing, but the verbal harassment in particular hurts me more and stays with me. I usually hear men shouting at me, asking why I’m out of my house. A guy would come close to me and whisper into my ear that I should stay at home and never leave the house for college.” The reason for this kind of harassment, Amal said, is because the male society perceives girls that are outside of the house as bad girls.

When a group of males were shown the cartoon in order to measure their judgments of women, their responses varied from positive to negative judgments. Ala’a Jarban, a 21 year old humanitarian activist, pointed out that there are men who are completely opposed to the cartoon’s portray of women’s role in society. “I am not saying that I would simply judge women as they are presented in the cartoon! I would criticize the mentality of people who would easily judge women in our society as presented in the cartoon! Women are not tools or cookies that we hide in our cookie jars; they are just equal to us men! We all have hearts and emotions, so why can’t we use those sincere emotions to treat women with love and respect. And whoever says that this is not right, then their souls are just blinded by selfishness and a fear of giving women a chance, because men know deep inside that women can be equal to them, if not better. I believe that everyone deserves freedom and should be treated equally, regardless of their gender, color, race, religion or sexual preference. Women are mistreated and misjudged by our selfish and male-dominated society. I, as a young male, will try my best to help women in all areas, and I know many young men will be there with me. But it won’t be enough if women themselves are not fighting back for their right to respect and freedom. Women have to know that the final forming of a person’s character lies in their own hands. Women all over the world should continue to work hard to make a difference, knowing that we will always be standing by their side.”

It’s quite interesting when males talk positively about women’s rights and condemn the prejudices women encounter. Walid Hussien, 21, college student, expressed his support for the idea that women must stop the ill treatment perpetrated against them by patriarchal societies. “I personally think this is how women are treated in our male-dominated societies. I’m not saying that all the women are treated like that, but let’s face it, the majority of women in our society are victims of prejudices. Unfortunately, Yemeni women are not only controlled by the society, and by controlled I mean oppressed, but also brainwashed to believe that this is the way it has to be, that they have to be isolated and not participate effectively in the community as a primary part of it. Women are judged by everything they do, including how they dress, as opposed to men who are free do whatever they want just because they are males! I hope one day women will stand up for their rights and do whatever they want to do, not whatever the majority forces them to do!”

Equality has lately been a main discussion between women. “I always tell my friends that we girls must demand equal chances and equal judgment as our male brothers. I don’t like to ask for equality in all terms of life, because we do have differences. As far as the cartoon is concerned, it’s a living reality for me. Everything I do is already considered a mistake just because I’m a girl,” said Rasha Sameer, a 4th year college student.

Shadi Hussien, 21, a student at Sana’a University, commented on the cartoon, saying, “Men have always been in the dominant role, since the being of time! What about women? They are still portrayed in a superficial manner.... A lot of progress has been made since the 1960s, but we are still discussing these kinds of issues. This truly reveals how little progress has been made towards women’s equality.

“Judgments are not fixed ideas. They could change quickly and positively. However, it depends on women’s determination in reforming their reality,” concluded Najat.